When I mentioned to family and friends that I planned to climb Kilimanjaro, as a solo female, the overwhelming majority laughed. Not in a malicious way, but in a “you over-estimate your abilities” type of way.

Because for an adventurous girl, I’ll admit that I wasn’t very fit. Ice-cream and chocolate were put on this earth to indulge, and I had developed an overly severe reaction to the gym. (To clarify, I was thin, just not fit).

And honestly, to begin with, I didn’t really care if I climbed Kilimanjaro or not. I was going to be in Tanzania, the mountain was going to be there, and I had read a feature about Thérèse Rein (the then Australian Prime Minister’s wife) and vaguely remembered that the climb was something you could brag about having done (I still use it as a sticking point on my adventurous resume to this day).

But for my original indifference of whether I completed the climb or not, the decision was made when I was told “it’s a lovely goal, I just don’t think you’ll get to the top.”

And honestly, I thank every single person who said this to me. Because this was the motivating factor which got me to the top. Come hell or high water (I did trek through hell, just not high water!), I was going to prove every single one of them wrong.

I often write about what travel has taught me, and how travel has changed my perspective on life. However a lot of my transformation happened on that mountain top. This is what I learned as a solo female traveler, who summitted Mt Kilimanjaro.

I’m Stronger Than I Thought I Was

For everyone who warned me about over estimating my abilities, I acknowledge that it was brutal climb. And in ways I could have never imagined.

On the night before the summit, you sleep for 3 hours to wake up at midnight to start your final climb. You’re tired, its freezing cold, and you’re following a line of head torches which snake their way through the darkness at what looks like a 90 degree angle into the sky. The altitude made me dry retch and the oxygen is so thin that it’s an extra effort just to take each breath. And you’re hiking through sand and pebbles so steep that sometimes it’s actually difficult to stand upright.

But as long as you can keep putting one foot in front of the other you CAN reach the top. For everyone who questioned my physical fitness, it was willpower and sheer determination which saw me reach the summit. I had to summit the mountain in my mind, which was the more stubborn mountain to climb.

And along the way I learned that I was stronger than I thought I was. I learned the immense power of the human spirit, and that if you can overcome self doubt and mental fatigue, there are no limits to the heights of your capability and strength.

There was nothing more gratifying than taking that final step onto the crater rim after 6 hard and grueling days of climbing. I collapsed into a heap and tears filled my eyes. Not because I was physically wrecked – which I was – and not because I was an emotional wreck – which I was – but because I had achieved something so incredible, and everything that had previously seemed impossible in life was suddenly possible once more.

And that knowledge is empowering. It gives you a renewed sense of self confidence and makes you fearless. And I learnt that if all else fails, I can rely on myself.

After picking myself up and drying my eyes, I witnessed the most incredible sunrise of my life, standing 5,895 meters above the ground, at the highest point in Africa.

It Humbled Me to My Core

Kilimanjaro strips you down, and humbles you to your core. Standing atop this colossal mountain, you quickly realize what a small part in the world you actually occupy, and realize that it’s about more than just you.

And any-one with an over inflated sense of self worth will have Mother Nature to answer to. There are no shortcuts on the mountain. No way to cheat the system or rig the climb. Everyone is the same, and everyone puts in the same amount of effort to reach the summit. You’re not better than anyone else on the climb.

I Learned to Value Support 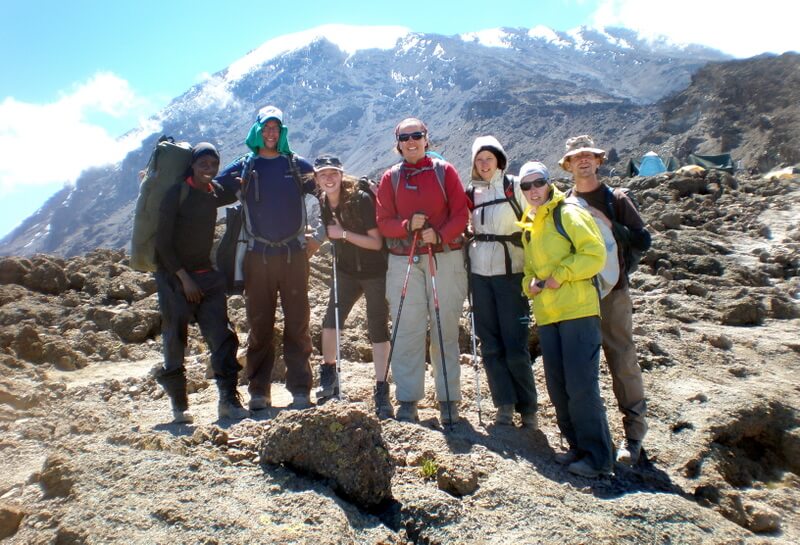 One of the most important lessons I’ve learned in life was to graciously accept support when it’s given – because even in the midst of your greatest challenges you’re never alone.

I resisted my porter in the final hours of my summit climb when he tried to shoulder my backpack for me. I could get there on my own. But why was I being so stubborn? What was the point in struggling more than I had to, when someone was offering to help?

While Kilimanjaro is a personal achievement, you’re surrounded by support. Between the porters, guides, cooks and other members on your climb, you all need to get up the mountain, so whether it’s sharing your water, or knowing the right thing to say, accept support when it’s given, and offer it if you’re in a position to do the same. While “personal victories are satisfying, shared victories are sublime” – Daniel Noll.

I Took a Hard Lesson in Patience and Persistence

I find that it’s easy in today’s world to become swept up by instant gratification, and give up if something becomes too hard. But you have to take Kilimanjaro Pole. Pole. (Swahili for “Slowly. Slowly”). And you’ll hear this on the mountain a thousand times.

Forced to move up the mountain at a snail’s pace might be exasperating at times, but this slow and deliberate pace allows you to preserve energy and become properly acclimatized to the high altitudes.

Everyone struggled, but those who raced up the mountain struggled a lot more. They over exerted themselves, and didn’t accept that it wasn’t a race. You’re taught on Kilimanjaro that to reach your goal you must slowly, surely, and deliberately put one foot in front of the other, all the way to the end, and I find that this is the same in life.

So when you’re on Kilimanjaro, take an extra day if you have to. Book with a company who offer longer, more creative itineraries. Whether you get to the top in 5 days or 7, everyone receives the same reward. A personal journey is never a race.

I Learnt How to Be Present 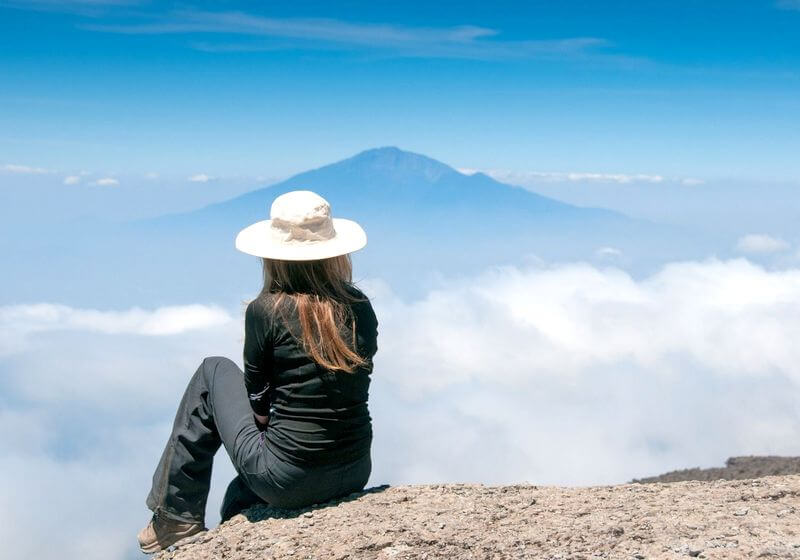 When you climb Kilimanjaro you’re mindfully aware of what is going on right here and now. You’re not spending time in the past or the future, you’re focused on what’s right in front of you.

You’re overcome with a much heightened sense of clarity and calm, as the rest of the world slowly disappears behind you. You fully appreciate the moments of the day, and soak in as much of the experience as you possibly can – the sights, the sounds, the smells, the emotions, the triumphs, and the struggle.

In a world where we’re either dwelling on the past or fantasizing about the future, the mountain teaches you how to be present. How to stop worrying about tomorrow and simply enjoy the moment today.

I Recognize the Benefits of Venturing Out of Your Comfort Zone

As it turns out, Kilimanjaro is powerful, awe-inspiring, and an experience which inspires transformation. When you stand on the roof of Africa, you see the world in a different way.

Thinking of climbing Kilimanjaro as a solo female traveler? Go for it!

Scroll back to top